Improv Troupe sets the stage for the new year 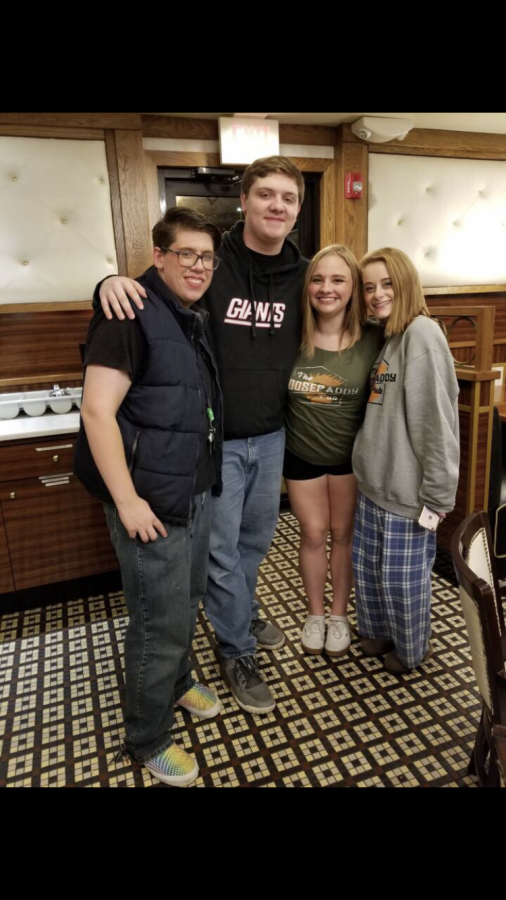 Entering the new year, the Sayreville Improv Troupe continues its run under new management – lead by newly elected Presidents Jodi Cesare, John Mendoza, and Dominic Afriyie –  as they continue their senior year. Factor in the departure of Dr. Piccuirro from the staff due to his retirement, leading Mrs. DiStaulo to take up the position of the club’s advisor, and it seems the Improv Troupe as we know it has nothing if not new blood running through its veins – making it the perfect time for interested newcomers to take their try at the stage.

While the club boasts a varied schedule – ideal for minimizing conflict with other club obligations – it most frequently meets on Fridays, twice a month at minimum, outside the auditorium before moving to one of their designated performing venues across the school. From there, the show begins – giving those who perhaps lack the experience of availability to take part in the school’s play or musical a chance to practice the art of stagecraft.

In an effort to create a welcoming environment in which to introduce others into their tight-knit club, the Improv Troupe hosts a variety of acting games and scenes each meeting, making for fun viewing for those with cold feet, and creating laugh-out-loud scenes to take part in even without any extensive knowledge of acting.

To name some of their more popular activities, these scenes can range from the group-driven “The Good, the Bad, and the Ugly” – a game in which a trio of actors attempt to answer questions with something, as the title implies, good, bad, and downright abnormal – or “The Dating Game”, a mock dating game show, to the fast paced chaotic stagework of activities like “Half-Life”, tasking actors with portraying the same scene repeatedly with less and less time to go about it on each attempt.

Even for those who may find themselves intimidated by the spotlight, the club’s disarming sense of humor makes for a good show all the same for any lucky viewer – and an even better time when experienced firsthand.

Yet for those craving something of a more ‘substantial’ experience for the thespians of Sayreville, with appeal to a larger audience than the closely-bound Improv Troupe family, the new triad of Presidents carries the torch of the predecessor’s most popular contribution to local theatre: The Murder Mystery Show.

An annual theatre experience hosted in the high school and written and performed entirely by Sayreville students with a storyline unique to each passing year, the Murder Mystery gives a select few Troupe actors the chance to put what they’ve learned to use in a wholly unique viewing experience.

Attendees who pay admission are provided with a full dinner at no additional expense, and not unlike the members of the Improv Troupe itself, get to be a part of the performance.  The actors portraying fictionalized party-guests who, between carrying out their murder-mystery plot amongst each other, take every opportunity to interact with the crowd, all while remaining entirely within character. By the night’s end, it falls to the audience to decide the story’s fate by selecting the culprit behind the titular murder – and as any past attendee can attest, each year’s twist must be seen to be believed.

As elaborated upon by Club President Jodi Cesare, “The event itself is a night of food, fun, and felonies! With a cast that receives a basic guide lines of only what plot-relevant points will occur that night, anything they say is entirely of their own wit. A lot of the time, the cast makes or breaks the show, but based on the enthusiasm and talent of the members of Improv Troupe, it definitely won’t be hard to find an ideal cast.”

She went on to reveal to our readers that while the performance itself isn’t slated to hit the stage until sometime after the Spring Musical, estimating it sometime in the month of May, auditions will be held this April at a date to be disclosed in the coming weeks.

With all this slated for the near future, and a talented new group of young actors at the helm, Improv Troupe actors-to-be who may find themselves lined up come the day auditions will be pleased to find that it seems the Improv Troupe has proven to improve with each passing year.